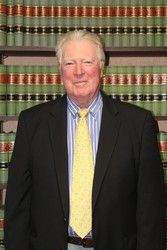 Frederick R. Dunne, Jr. serves clients needs in matrimonial law, family law, and real estate law, both residential and commercial, throughout the state of New Jersey. Working from our Hoboken, NJ, and Kearny, NJ, offices, Mr. Dunne additionally handles numerous matters involving school law, as he had been a School Board attorney for the Kearny School System for 17 years. He also handles municipal court matters, as he was the Public Defender for the Borough of North Arlington for 18 years.

Mr. Dunne has received numerous honors, including 20 Superior Court of New Jersey Hudson County Certification of Appreciation for his participation in the Early Settlement Program for Matrimonial Matters in Hudson County and has been named the Who's Who in American Law more than 12 times.He is also a past president of the Kearny Lions Club and is the current President of the West Hudson Bar Association. Mr. Dunne was selected as an Outstanding Young Man of America for 5 consecutive years shortly after he opened his first law practice.

Dunne, Dunne & Cohen, LLC is a family-owned and operated law firm. Our attorneys have represented clients in in both civil and criminal law for a combined total of over 60 years. Our prestigious distinctions and affiliations include:

If you are looking for legal representation, contact a member of our trustworthy team for a free consultation. You can reach one of our accessible office locations in Hoboken and Kearny, NJ, online, or by calling (201) 998-2727.

*Disclaimer: the information provided by this website is for informational purposes only and should not be considered legal advice or a substitute for competent legal counsel.

By Appointment Only.
ALL DELIVERIES ARE TO MADE TO OUR KEARNY ADDRESS

By Appointment Only.
ALL DELIVERIES ARE TO MADE TO OUR KEARNY ADDRESS